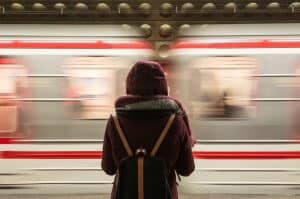 LOS ANGELES – Over the last decade, there have been a number of disastrous and heartbreaking train accidents across the nation. Some of these incidents happened in Southern California, where train safety hits home for many families.

Nine years ago, a Metrolink commuter train struck a freight train head-on outside a tunnel in Los Angeles, just east of Stoney Point. According to the National Transportation Safety Board, the Metrolink train ran through a red light before entering the dangerous section of track where the collision occurred.

Investigators determined the train’s engineer was distracted by text messages he was sending while on duty, causing him to zoom past the red light.

A month later, Congress passed a law that would prevent accidents like this. The law called for major railroads to install a computer and GPS-based crash avoidance system. In the event of an emergency, the computers would take control of trains and stop them, if the engineer makes an error that could cause a crash or derailment.

These mandates still haven’t been met by many major railroads. In fact, Congress had to extend a 2015 deadline by three years – to 2018. And the deadline may soon be extended again.

The technology has been dubbed Positive Train Control, or PTC. Since the mandates went into effect in 2008, the Association of American Railroads states PTC has only been installed on 38 percent of more than 60,000 route miles – and only half of the 125,000 railroad employees who need to be trained have received training on the system.

Critics have been loud, claiming the railroads are stalling and taking too long – and Congress is letting them get away with it, as preventable crashes occur each year. Railroads, on the other hand, argue the system is very complex and expensive; costing the industry nearly $8 billion to date.

Despite the industry’s complaints, the Federal Railroad Administration has warned railroads that they need to step-up the pace and meet the next deadline in 2018.

Some railroads are on track to complete these upgrades, but many still lag behind, with only a portion of their trains and tracks compatible with the GPS-based system.

WHY THE SYSTEM IS NEEDED NOW

A Los Angeles train accident lawyer at The Barnes Firm says many families have already suffered as a result of delayed implementation of PTC. According to the NTSB, there have been several accidents since 2015 that could have been prevented with the safety system in place, including a devastating crash in Hoboken, New Jersey in 2016, and a deadly crash in Philadelphia, in 2015.

The attorneys at The Barnes Firm have represented train accident victims across the nation. One of the firm’s Los Angeles train accident lawyers feels another delay would put more lives on the line.

“Safety advocates have been calling for this system for nearly 50 years, so it’s not like PTC is something that was just suddenly thrown at railroad companies who run tracks through Los Angeles,” train accident attorney John Sheehan said. “Every day this system isn’t being implemented and used is another day that an accident could occur.”

The NTSB is also on board with sticking the 2018 deadline. According to the board’s website, “safety delayed is safety denied, and every day without these lifesaving advances holds the possibility of another accident like the ones in Philadelphia and Chatsworth.”

Los Angeles train accident attorneys say the system won’t prevent every serious accident, but it should be viewed as an additional safety measure that can save lives – like seat belts or air bags in cars. And until the system is properly installed on all track lines, train passengers run a higher risk of getting injured.

If you or a loved one has suffered an injury or a loss in a train crash, The Barnes Firm has years of experience handling these types of cases. Contact a Los Angeles train accident lawyer for a free case evaluation.