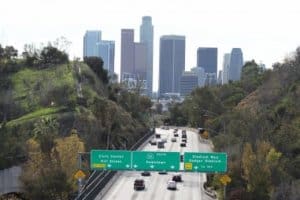 LOS ANGELES – There are a lot of reasons millions of people call the Southland home – but traffic isn’t one of them. Fortunately, there are many different ways to get around town at a low cost but each of them has challenges. So, let’s race!

Who would win in a race from the Hollywood Bowl to LAX – a driver? A bicyclist? Or a transit rider?

A Los Angeles car accident lawyer at The Barnes Firm says each mode of transportation has serious safety concerns.

“Bicyclists only have a helmet to protect them but we all know car crashes are very common in Los Angeles,” car accident attorney John Sheehan said. “Even with seatbelts and air bags, car crashes injure thousands of people each year.”

Using mass transit can be dangerous too – most transit buses either don’t have seat belts or they are not enforced when the safety feature is available. Although the bus is statistically the safer option of the three, the injuries can be catastrophic when there is a bus crash and more than 12,000 people are injured every year.

Now that you know the risks, make the call yourself: transit, car or bike? (This is just hypothetical)

As the car speeds off without you and the bicyclist starts peddling down Highland Ave, you have to walk. The trek is about a mile to the nearest bus stop on Highland and Hollywood. If you walk fast, you can make it there in 15 minutes.

Lucky you – just as you get to the bus stop, you spot the Metro Red Line slowly lurching toward you in the afternoon traffic. Find yourself a seat and you’re on your way downtown to Union Station. Unfortunately, there’s heavy traffic along Hollywood and North Vernon and some of these drivers aren’t too happy with your 8 bus stops. One of those drivers, in a fit of road rage, nearly crashes into your bus.

They’re visibly upset but cooler heads prevail and you move along to your next stop.

After 30 minutes of stop-and-go traffic, your bus rolls to a stop downtown at the corner of 7th Street and Flower. That’s your cue: time to find another ride.

The Metro Silver Line will take you to Harbor Freeway Station underneath the 110 and the 105.

After waiting 15 minutes, your bus arrives. You hop on and the Metro makes its way down Flower, merging onto the 110 where traffic immediately slows to a crawl. The bus stops 9 more times before arriving at Harbor Transitway.

After getting off the Silver Line, it’s time to hop on the Green Line. You hear the honking of car horns on the lanes stacked above you. It might be another 15 minutes before the next bus arrives. Right on cue, you jump on the Green Line – and it only has four stops along the 105 – taking you to the airport in just under 15 minutes.

From the Hollywood Bowl, you start heading south on Highland and begin thinking about the benefits of using a bicycle to get around.

“Bicycles are one of the healthiest forms of transportation and many cities like Los Angeles are making changes to infrastructure to improve safety,” Sheehan said.

Most of the ride to LAX is downhill too – but you’ll have to battle many of the area’s most dangerous intersections.

After 15 minutes, you’ve already passed Santa Monica Boulevard and while many drivers are caught in traffic, you can use the bike lanes to zip by. However, there’s an accident waiting to happen:

A driver pulls out of a parking lot, nearly causing you to crash. Luckily, you were able to brake in time and avoid a dangerous situation.

After cycling for 45 minutes, you’re on Venice Boulevard – and you know you need to pick up the pace. Fortunately, you know a shortcut that takes you through Syd Kronenthal Park alongside Ballona Creek. From here, it’s a straight-shot to the airport on Sepulveda, but it’s still a long trek.

Your shortcut on the bike path paid off for you and within 30 minutes, you’re getting off Sepulveda at the L.A. airport.

You know you have several options but you decide the most direct route is probably the fastest so you lay your foot on the gas and zoom past the bicyclist and the transit rider on Highland Ave. But the stop-and-go traffic can be frustrating.

After 15 minutes, you’ve had enough and decide the freeway is the better choice. So, you head west to the 101. In your effort to make it onto the freeway, you get stuck behind a bus. It’s important to keep your cool but you honk your horn and attempt to pass it – just as it’s pulling away from a stop!

“When drivers aren’t calm and collected, they run a higher risk of causing an accident,” Sheehan said. “We understand traffic can be frustrating but a crash can be much more frustrating.”

You shake it off and get on the 101 and head downtown – just in time to hit rush hour traffic.

The 101 was awfully packed but the 110 is even worse. Slowly, you make your way through Huntington Park and merge onto the 105.

Now you know why traffic is so slow: you pass by an accident. One car rear-ended another and although no one appears injured, Los Angeles car accident attorneys say injury symptoms can sometimes take days to appear.

“Rear-end collisions are some of the most common types of crashes,” Sheehan said. “These often cause neck and head injuries from whiplash – and the pain often grows worse with time.”

As you pass the accident, traffic begins to clear.

As you merge off the 105 onto Sepulveda Boulevard, you hit some heavy airport traffic but you’re not worried; you’re sure you have the bicyclist and transit rider beat by now… but you forgot one thing: parking.

After parking your car, you make your way to the terminals to find your friend, the bicyclist waiting for you.

Los Angeles attorneys say safety is the most important part of any commute. Just one accident can severely impact your travel time. Whether you’re riding a bike, taking the bus, or driving a car, an accident-free commute is always the fastest.