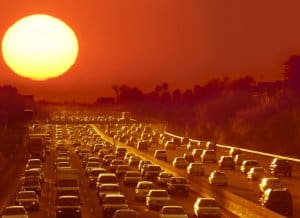 LOS ANGELES – If you’ve ever been on the Interstate 10 on Friday afternoon, you know what people hate about living in southern California. Rush hour traffic in the Southland seemingly lasts all day and sometimes all evening. Los Angeles car accident attorneys say there are several reasons behind the bumper-to-bumper traffic and among them are car crashes.

According to a Los Angeles Times poll, traffic and congestion is the greatest concern among L.A. residents. Of the 1,500 people polled, more than half of them expressed disgust with traffic more than any other issue, including personal finances, crime, gangs, and the lack of affordable housing.

A Los Angeles car accident attorney at The Barnes Firm says reducing the number of traffic crashes is one step that could help reduce congestion.

“A car crash can back-up the highways for hours in Los Angeles,” car accident attorney John Sheehan said. “One accident can cause more crashes as vehicles try to slow down from highway speeds to avoid a stopped car – it’s a dangerous situation.”

According to experts at the University of Southern California, Los Angeles was planned around the idea of urban sprawl and vehicles quickly replaced mass-transit systems.

Most commuters today drive alone, adding to the congestion but professors at USC say just a small number of carpools and rideshares would drastically reduce the traffic.

Attorneys say a reduction in traffic could also reduce the number of crashes.

“We’re taught to be defensive drivers because you don’t know how other drivers will react on the roads,” Sheehan said. “Take those other drivers off the road and your chances of getting in an accident could go down.”

In Los Angeles alone, more than 50,000 people were injured in car accidents last year and hundreds of others were killed.

Although safety features have helped reduce the number of fatal crashes, experts say reducing traffic could prove to be just as helpful. More investments are being made into rail systems and other forms of public transportation but the traffic congestion still grows.

Experts suggest avoiding peak travel times could allow you to avoid the traffic – and the headache. It may even save you from a potentially dangerous crash.