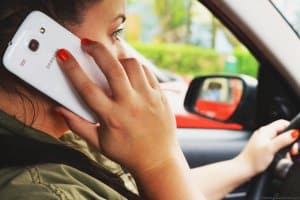 SAN DIEGO – In most states, it’s illegal to have a phone in your hand while driving – and for obvious reasons. A distracted driver is a danger to themselves and others – and, according to the National Safety Council, cell phones are a major factor in 1.6 million crashes every year.

What’s most concerning is that despite the statistics, distracted driving continues to be a major factor in most car crashes.

A new study at the Queensland University of Technology (QUT) aims to determine how drivers are even trying to juggle distracted driving and safety. Already, more than half of the drivers participating in the study have admitted to talking on the phone, texting or even browsing the internet while driving.

A San Diego car crash lawyer at The Barnes Firm says even with a hands-free device, drivers can be so distracted that it could cause a dangerous car crash.

“Simply talking on the phone quadruples your risk of crashing in San Diego,” car accident lawyer John Sheehan said. “Although it’s not illegal for most adults to use hands-free devices, they’re still risky and studies have shown that it’s an unnecessary distraction.”

Researchers say when drivers focus on multiple tasks while they’re behind the wheel, they often compensate by slowing down or changing their driving behavior in other ways. Study authors said while this give-and-take approach sounds safe, it’s still not clear whether it really improves road safety.

For example, drivers using their cell phone could slow down in a sub-conscious effort to improve their safety. However, the same drivers are so distracted that they don’t readily see pedestrians crossing the street.

According to study authors, they’re conducting the research for two reasons:

“It is essential we understand how this affects driving behavior in order to develop countermeasures to make mobile phone use safer,” a study author wrote.

Across the nation, cell phone use is a major concern.

“Texting has a very real and dangerous effect on all drivers,” Sheehan said. “Unfortunately, we see this on a regular basis when people come to us with serious injuries after they were struck by a distracted driver.”

Researchers hope their findings will help save lives on roads across the world; and the QUT study could have implications for driverless cars and other developing technologies.

For now, safety advocates urge all drivers to abide by the laws in your state. Most often, that means keeping your hands off the phone while you’re behind the wheel.

The Barnes Firm helps car crash victims across the country and with offices in both New York and California, our lawyers have the ability to investigate car accidents and help clients obtain the best result possible. If you’ve been injured in a crash, contact one of our lawyers today for a free case evaluation.