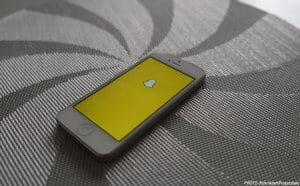 In the world of selfies, filters and face-swaps, it’s just harmless fun. But for many people that ‘fun’ can get real dangerous, real fast.

According to a new lawsuit, an 18-year-old woman crashed her father’s Mercedes while trying to exceed 100 mph on Snapchat’s ‘speed filter.’ The photo-app’s filter overlays a graphic showing how fast its user is traveling.

A car crash lawyer says this is another example of how distracted drivers are making the roads a dangerous place, despite safety improvements in cars and infrastructure.

“Distracted driving is now the top cause of car crashes,” car accident attorney Landon Vivian said. “More than ever, people are attached to their smartphones and apps – it’s not just talking on the phone or text messaging anymore.”

Some safety advocates argue apps like Snapchat are not only distracting; they’re also encouraging distracted driving. According to the lawsuit, Snapchat awards users a ‘trophy’ for sending pictures showing how fast they were going.

“Snapchat’s speed filter facilitated [the driver’s] excessive speeding. [The driver] was motivated to drive at an excessive speed in order to obtain recognition through Snapchat by the means of a Snapchat ‘trophy,'” the complaint states.

According to police, the teenager struck a Mitsubishi Outlander at 107 mph on a road with a speed limit of 55. Accident investigators noted that even after the crash, the teen driver took to Snapchat to post another selfie with the caption, “Lucky to be alive.”

Even before this incident, some launched a petition to remove Snapchat’s speed-tracking feature, for safety purposes.

Snapchat says it sends an in-app ‘warning message’ telling users not to use the speed filter while driving.

The  car accident lawyers at The Barnes Firm have been helping injured victims achieve the best results possible.

In addition to assisting car accident victims, The Barnes Firm aims to make safety a priority on the roads. If you’ve been injured by a distracted driver, call a car accident attorney today for a free case evaluation.