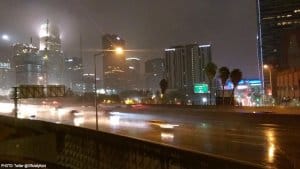 LOS ANGELES – Although the following stories come from a recent Southern Californian storm, rain can cause severe traffic problems anywhere in the country. From New York to Florida, Texas to the Pacific Northwest, rain is the most dangerous weather for drivers.

Those of you in Buffalo may think snow is the deadliest weather condition to drive in but you’d be wrong. Although snow and ice can make your commute a nightmare, rain causes more fatal crashes in 39 of the 50 states, including New York and California.

“Wet weather conditions are more common and drivers tend to be less cautious, as many people found it this week in Los Angeles,” car accident lawyer John Sheehan said. “The rain and flooding caught many drivers off-guard and it resulted in a spike in car crashes.”

Southern California was walloped with rain this week. Downtown Los Angeles saw a record breaking 2.39 inches of rain. That broke the previous record of 0.03 inches set in 1968. A low-pressure system stemming from a Pacific hurricane caused heavy flooding and rock slides that prompted several road closures. In the San Bernardino National Forest, one person drowned as a result of the extreme conditions.

Two other incidents of flash flooding resulted in more than a dozen deaths in Utah.

“Roads can have a buildup of oil after a long, dry summer,” Sheehan said. “This can lead to extra slippery driving conditions.”

As leaves and debris hit the roads this fall, rains can get even more dangerous. Sheehan says the debris can clog drainage systems and lead to major flash flooding and instances of hydroplaning, even with a minor rainfall.

According to the California Highway Patrol’s Southern Division, officers responded to nearly 400 crashes in the span of just four hours on Tuesday.

The rains also flooded a freeway and caused a deadly crash in Long Beach. In Corona, the 91 freeway developed a large crack the size of half a football field, prompting emergency repairs and in Pasadena, big rig crashes forced closures along the 210 freeway.

Attorneys are now warning all drivers to use caution during a fall rain. Many climatologists believe this week’s storm was just a preview of the long, wet autumn to come as the result of a massive El Niño.