Report: This City Has the Worst Drivers in America 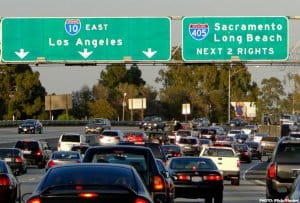 LOS ANGELES – In case you haven’t seen the 101 freeway lately, most Angelinos have cars. Not all of them particularly like driving, especially with so much traffic but they’re behind the wheel nonetheless. It’s a way of life in Southern California and it’s a dangerous one.

According to a new report, drivers in Los Angeles don’t do a very good job of keeping the bumper scratch-free. The report from Allstate found that L.A. drivers tend to crash… a lot.

On average, Angelinos will crash their cars every 6.3 years. That’s almost 60 percent higher than the national average, making L.A. one of the most dangerous driving cities in America.

A lawyer at the Los Angeles car accident law firm, The Barnes Firm, says traffic often plays a role but almost every crash can be avoided with an attentive driver.

“It’s not always easy for drivers to pay attention to the road when the traffic isn’t moving anywhere in Los Angeles,” car accident lawyer John Sheehan said. “Some drivers choose to occupy themselves with their smartphone or another distraction and that can start a dangerous chain reaction.”

Drivers spent an average of 81 hours struck in traffic on SoCal freeways each year. That’s plenty of downtime for distractions – and the smartphone is the go-to device.

More than 3,000 people were killed and another 431,000 people were injured in car crashes involving a distracted driver last year. Los Angeles car accident attorneys say that adds up to around a quarter-million preventable crashes across the nation.

“Drivers are more distracted than ever and when you look at the numbers, the cities with heavy traffic tend to have high rates of car crashes,” Sheehan said. “Even when the traffic is slow or at a stand-still, you’re still surrounded by cars and the driver’s focus has to be on the road.”

Los Angeles wasn’t the worst-ranked city. In fact, places like Boston, Washington and Baltimore had worse ‘safe driving’ scores than L.A., according to the report. However, those cities often battle inclement weather and sometimes snow and ice.

The greatest snowfall recorded in downtown L.A. was 2 inches on January 15, 1932 and it didn’t last long. Let’s face it: Los Angeles has some of the most ideal driving conditions year-round.

Still, Angelinos are crashing at an astounding rate.

Some are caused by drunk drivers, others by high-speeds or distractions. They keep happening in our cities, in our neighborhoods, and on our streets. They cause severe injuries and sometimes, death – and almost every crash could have been prevented with a responsible driver behind the wheel.

If you’ve been injured by a negligent driver, contact the Los Angeles car accident attorneys at The Barnes Firm today for a free consultation. With offices across the nation, The Barnes Firm can help you obtain the best result possible.