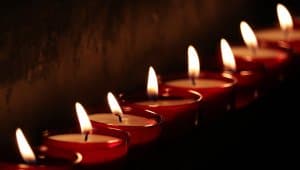 LOS ANGELES – A lone palm tree on the corner of Vermont Avenue and Olympic Boulevard was surrounded by votive candles and decorated with notes, pictures and flowers.

“Rest in peace,” one note reads in Spanish.

Dozens of friends, family and neighbors started the growing memorial on Monday to remember and honor the 44 people who were on board a USA Holiday bus as it slammed into the back of a tractor-trailer on I-10 outside Palm Springs.

The Riverside County coroner’s office has identified the 13 who were killed in the crash:

An experienced Los Angeles bus accident lawyer will gather witness statements from qualified commercial drivers and truck experts regarding the condition of the roadway and the truck itself. Using these statements and a complete analysis of the two vehicles involved, an experienced lawyer can help families get answers.

In many other California bus crashes, families have received compensation for injuries or losses. This compensation could cover:

Families will also have many questions about how – and why – the crash happened:

A Los Angeles bus accident attorney will also examine the construction zone and the steps supervisors took to make sure traffic was flowing safely. In some cases, the proper warning signs may not have been posted or lit, the road surface may not be suitable for traffic or other accidents may have occurred in the same construction zone.

In addition to helping families get the best results possible from their claims, a Los Angeles bus accident lawyer can also help spur changes to make sure similar bus tragedies are minimized or prevented in the future.

Lester Gomez told the Los Angeles Daily News that his father, Gustavo Green Gomez was one of the 13 people who died in the California bus crash early Sunday morning following a trip to the Red Earth Casino in Thermal.

“It’s difficult right now for us,” Lester Gomez told reporters as he talked about his father, Gustavo Green Gomez. “He had 10 children.”

Family members and friends said the group met many times at the corner of Vermont Avenue and Olympic Boulevard to board the USA Holiday bus bound for the casinos outside Los Angeles.

Jennifer Ruiz told reporters that her mother, Rosa Ruiz, enjoyed the trips to the casino with her friends.

“She loved it,” Jennifer Ruiz told the Daily News. “Everything she did, she did it with no regret. That was her thing. Some people love to go to the movies, my mom loved the casino.”

Rosa Ruiz was born in Guatemala but had been living in the U.S. for over 30 years, the Daily News reported.

Chris Ramirez and Jacquelynn Ochoa shared stories of their grandmother.

“She taught me that hard work pays off,” Chris Ramirez said.

“She was like a second mom to me,” Ochoa told reporters.

Aguilera’s grandson, Ricardo Mendoza, said he flew in with his family from Ohio after they heard about the California bus crash.

Many others joined Ricardo Mendoza at the memorial on Monday including Francisca Escobar, who had learned that her boyfriend, Tony Mai, was among those who didn’t survive the crash.

Francisca Escobar told the Daily News that she had met Tony Mai five years ago on a casino bus similar to the USA Holiday bus Tony Mai took on Sunday.

Many notes and pictures at the Koreatown memorial reflected upon the others who passed away in the crash: Concepcion Corvera, Milagros Gonzales, Isabel Jimenez Hernandez, Dora Rodriguez, Elvia Sanchez, and Aracely Tije.