Recovery from a Dog Bite 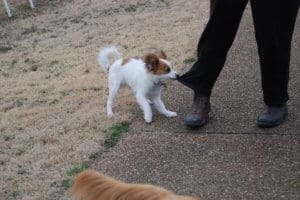 OAKLAND, Calif. – Dog bites are both physically and mentally scarring, especially for a young child. Unfortunately, children are most at risk for suffering a vicious dog bite. An attack can leave a child with permanent disfigurement with an astounding medical cost.

It’s estimated that dog bites cost patients an average of $18,200 in treatments. Last year, Americans spent over $54 million to treat victims of a vicious dog attack.

Oakland dog bite attorneys at The Barnes Firm said it’s important for victims to get an experienced attorney who focuses on personal injury dog attacks, so the victim can get compensation they need for recovery.

“Many victims underestimate the cost of recovering from a dog bite in Oakland,” dog bite attorney Landon Vivian said. “Patients not only have the initial emergency room costs; these attacks usually leave scarring and that can require plastic surgery, rehabilitation or years of counseling.”

A recent verdict in Connecticut awarded $237,000 to a 13 year-old girl after she was mauled by two dogs last year, including a Labrador retriever. The attack resulted in a small but noticeable facial scar.

Oakland dog bite lawyers suggest victims always research attorneys and contact a firm that can get you the largest settlement or verdict because the costs of treating a dog bite can be unexpectedly high.

According to court documents, a judge awarded the Connecticut girl over $11,000 in economic damages for past and future medical costs, including plastic surgery to reduce the scar’s visibility. The remaining $226,000 will be set aside for a college fund.