This is Probably the Worst Freeway in the US 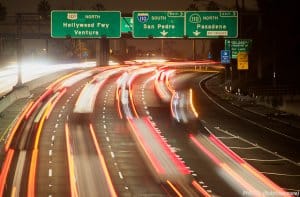 LOS ANGELES – Clearly, you’ve read the title of this article. Is it such a surprise that the location is Los Angeles? Nah.

If you’ve ever been in L.A. you know traffic dictates your life. Every Los Angeleno plans their days, weeks and years around traffic. According to TIME, drivers spend a whopping 90 hours in traffic every year in the Southland. So let’s be honest, is it really surprising that the worst freeway in America is located in California? Nope.

Ask almost anyone who lives in the greater L.A. area and they will tell you that their daily commute is the absolute worst. Some of those people might be right, according to this analysis conducted by the Auto Insurance Center which found that one major Los Angeles freeway is indeed worse than the others.

The U.S. 101 between Topanga Canyon Boulevard and DTLA is the pits. It truly is ‘highway hell’ for the thousands of drivers who travel the nation’s most crowded roadway every single day. This stretch of the 101 is only 30 miles long but it can take drivers over an hour to traverse as cars creep along the dotted pavement at an average speed of 17 mph.

A Los Angeles car crash law firm. The Barnes Firm, says the 101 is not just a slow highway; it can also be a dangerous one if drivers are not careful.

“There are dangerous and deadly accidents on the 101 every day in Los Angeles,” car accident lawyer John Sheehan said. “Even though the traffic may not be moving fast, it’s important for all drivers to be alert and pay attention when they’re at the wheel.”

According to recent news reports, accidents occur just about everywhere on the 101. While some sections are certainly more dangerous than others, drivers can quickly become victims of the 101 freeway at any time.

Researchers at the Auto Insurance Center also found that the traffic in L.A. is very costly. Even if accidents are removed from the equation, a driver in Los Angeles, Anaheim or Long Beach could spend an extra $2,000 on gas each year just by sitting in traffic.

One of the cheapest communities in the country however, is just five hours north of Hollywood in Turlock, California. Drivers there only lose $31 each year in traffic.

For more driving tips and to discover new ways to ease your commute, Like The Barnes Firm on Facebook.