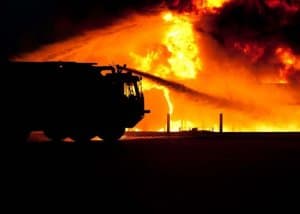 OAKLAND, Calif. – A fire destroyed a two-story warehouse and studio during a Friday night party in Oakland. The blaze killed at least nine people and a day later, about two dozen are missing, the city’s fire chief said.

Oakland Fire Chief Teresa Deloach Reed told CNN dozens of people, maybe even over 100, were at a warehouse party when the fire started. Fire officials believe many of those who died in the intense fire were trapped on the second floor, where people probably had difficulty leaving because a make-shift stairway made of pallets was the only way down to the first floor, and exit.

According to a Facebook page, the building fire at 1305 31st Avenue broke out during an electronic-music party on Friday night. Friends and family used the Facebook page to post the names of those they believed may have attended the party, and are possibly missing or killed by the fire. Around 25 are unaccounted for, fire officials said.

An Oakland personal injury lawyer says deadly fires like this can be devastating for individuals who have suffered an injury – and families who have lost a loved one. After most structure fires, there are many questions friends and families want answer to.

These are just some of the questions families will want answered.

An immediate legal investigation will aim to get those answers as quickly and efficiently as possible. An experienced California legal team will analyze all building records and work with fire officials to gather all the evidence needed to make sure victims and their families get the best result possible from their claims.

Many of those who are injured in a fire – or families that have suffered a heartbreaking loss have often received significant compensation when they file a claim. A successful claim will often help the victims and their families cover many of the expenses from the injuries and damages sustain because of the fire. This may include lost wages, medical expenses, and compensation for pain and suffering.

Several victims from the fire at 1305 31st Avenue may also have medical expenses as Oakland’s Highland Hospital told CNN that doctors received several patients who escaped the Friday night blaze.