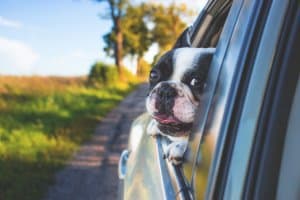 SAN DIEGO – California is home to the hottest place on Earth and many areas of the state can reach sweltering temperatures year-round. When it gets hot, your car can become an oven and that’s a concern for many four-legged friends.

According to veterinarians, it only takes 20 minutes for the interior of a car to exceed 100-degrees. Many pet owners should know better than to leave their furry friend in a hot car but every year, thousands of pets die in parked vehicles, suffering from heat exhaustion.

A San Diego personal injury lawyer at The Barnes Firm says heat exhaustion is a dangerous and deadly condition for both pets and humans – unfortunately, pets can’t sweat it out.

“Heatstroke can be deadly in San Diego,” personal injury attorney John Sheehan said. “After just a few minutes in extreme temperatures a person can get severely ill and the symptoms can be much worse for pets.”

After many heartbreaking incidents last summer, California lawmakers drafted “The Right to Rescue Act” and introduced it to the state Assembly this week.

The proposed bill would allow any witnesses to smash car windows to rescue pets from an overheating vehicle.

To generate backing for the bill, several state Assemblymembers filmed themselves locked inside a car for 21 minutes while the temperature outside rose to nearly 90-degrees. Inside the vehicle, the mercury reached 108-degrees.

The state already has a law that prohibits parents from leaving children under the age of 6 unattended in a car or truck. And another law allows bystanders to rescue children if they are left unattended but currently, there are few laws to protect pets.

“Hopefully parents are responsible and no one ever has to enforce these laws,” Sheehan said. “With summer around the corner, we’re urging both parents and pet owners to double-check their vehicles every time you step out of the car.”

In the past, some pet owners have rolled down the car windows slightly in an effort to help Fido cool down but according to a study by the American Academy of Pediatrics, leaving the car windows open has no effect on the heating process inside. In tests, the temperature still rises significantly in as little as 15 minutes.

In an effort to prevent a tragedy – and to save yourself a car window – San Diego personal injury lawyers at The Barnes Firm urge all drivers to be responsible with children and pets in the summer heat. Never leave a loved one unattended in a vehicle and always check twice before the locking the doors.