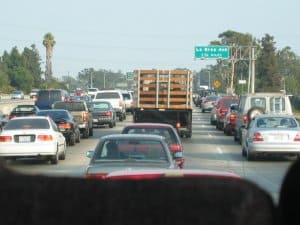 LOS ANGELES – There are so many things residents and visitors love about L.A., but everyone agrees the traffic isn’t one of them. In fact, drivers spent over 100 hours in SoCal traffic jams last year, more than any other city in the world.

Traffic across America is a growing problem. According to a traffic scorecard compiled by Inrix, a transportation analysis company, more than half of the most congested cities on the list were in the U.S., where drivers spent an average of 42 hours per year in traffic — during rush hour times alone.

Gridlock cost the average American driver a whopping $1,400 in 2016. Add that up, and that’s almost $300 billion in wasted fuel and time, the report found.

Many traffic jams are caused by car crashes, which can shut down major thoroughfares, and divert traffic to already clogged side-streets and access roads. Several safety improvements, like accident avoidance technology, are expected to be introduced in vehicles over the next few years, but many transportation specialists believe traffic isn’t going to be getting any better.

An LA car accident attorney at The Barnes Firm says traffic in the Southland could even get worse.

“When there are more drivers, there are more traffic collisions, and we’ve seen both of these spike in Los Angeles,” car accident attorney John Sheehan said. “A stronger economy has put many drivers back in their vehicles, adding to the overall congestion, and it raises the risks for drivers.”

For the second straight year, deadly traffic collisions have increased on U.S. roads after decades of declining numbers. Since 2015, deadly crashes have gone up 14 percent.

WHEN TRAFFIC GETS DANGEROUS

Sudden stop-and-go traffic can often cause dangerous collisions in Los Angeles. Many times, innocent drivers and passengers can get seriously injured or killed as a result.

If you or a family member has suffered an injury in a car crash, the road to recovery can be difficult and expensive; but you don’t have to battle the insurance company alone. The Los Angeles car accident lawyers at The Barnes Firm have helped many Californians maximize their personal injury claim. In some cases, an injured driver or passenger could get many times more than what the insurance company offered.