Hit & Run Drivers Not Only Go To Jail; They Ruin Lives

LOS ANGELES – There’s an epidemic sweeping the nation that has sent thousands of people to emergency rooms over the last 12 months. The number of hit and run crashes has skyrocketed and there are few places that have it worse than Southern California.

In January, Los Angeles County deputies arrested “Suge” Knight, a high-profile rap mogul who co-founded the multi-million dollar label, Death Row Records. Authorities said Knight drove over two men in a parking lot at a fast-food restaurant. One of the men was taken to the hospital with injuries; the other was killed in the hit and run crash.

Statistics from the National Highway Traffic Safety Administration (NHTSA) show hit and run fatalities happen every day. The NHTSA estimates one in five pedestrians fatally struck on public roadways are killed by hit and run drivers and in Los Angeles, nearly half of all crashes involve a hit and run accident.

“It happens unfortunately,” a Los Angeles Police spokesman said. “So many drivers don’t have a license to drive, insurance, or they might be under the influence of drugs or alcohol so they just do not want to be stopped.” 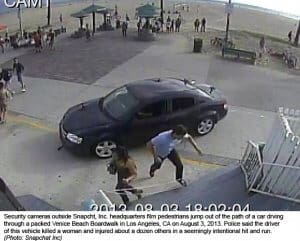 About 20,000 hit and run collisions are recorded by the LAPD each year and their victims are often left with repair costs, severe injuries and even death.30

“Sometimes it’s very difficult to find the driver responsible in Los Angeles,” car accident lawyer John Sheehan said. “In most cases, victims have to get their own car insurance companies to cover the costs.”

Car accident attorneys in southern California suggest being very observant on the roads at all times, whether you’re driving or walking near a motor vehicle thoroughfare. Traveling in groups of two or more increase the chances that someone will spot a license plate number in the event of a hit and run accident.