Game is a Serious Distraction 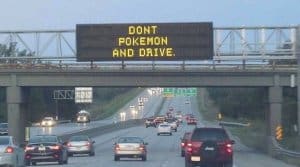 Americans are faced with more distractions than ever and we can add another item to a growing list of dangerous distractions: Pokemon GO.

Just months after it was released on smart phones everywhere, the popular smart phone game may be responsible for more than 100,000 distracted driving incidences over a 10-day period in August.

A new study published in JAMA Internal Medicine found that it’s not just pedestrians distracted by the augmented reality game; drivers accounted for hundreds of close-calls in traffic and in more than a dozen cases, their obsession with Pokemon GO led to car crashes.

A car accident lawyer at The Barnes Firm says the game may have caused even more car crashes, as some drivers may not be quick to admit that they were behind the wheel while playing a game on their smart phones.

“Driving is an activity that requires 100-percent of your attention and it doesn’t matter whether you’re going 60 miles per hour on the freeway or stuck in rush hour traffic,” car accident lawyer John Sheehan said. “Distractions are a factor in more than half of the accidents on the road and each year, thousands of people are injured or killed by a distracted driver.”

When Pokemon GO was launched in July, many doctors praised the game for incorporating physical activity. Players are required to walk around the neighborhoods and cities to “find” Pokemon characters that are located in various real-world locations. But many experts changed their tune within the first few days.

If you’ve ever played Pokemon GO, it probably didn’t take long for you to realize how dangerous it could be when placed in the hands of a driver. The game often demands the player to lock his or her eyes on the screen.

However, researchers found that it wasn’t just drivers causing problems. Passengers in cars often encouraged reckless and distracted driving so that they could “catch” a Pokemon or reach a particular landmark. Game developer, Niantic, has already made several updates to discourage playing the game while driving and some game experts believe Niantic may expand its safety updates to make it impossible to play the game at certain speeds.

Some of these updates can curb distracted driving incidents but it likely won’t eliminate them.

“Drivers can be distracted at all speeds,” Sheehan said. “Yes, high-speed crashes are often more serious but low-speed crashes can cause devastating injuries as well and in both cases, the driver can be held liable for a person’s injuries.”

The authors of the recent study also noted that car crashes are the leading cause of death among teens and young adults. In fact, 60 percent of crashes involving younger drivers occur within six seconds of a distraction event.

The game was created for a user’s amusement but the spike in distracted driving incidents is not amusing. There have also been a number of incidents involving distracted pedestrians and in one case, two men fell over an ocean bluff while playing the game.

Study authors hope their findings will spur future safety developments – for both game makers and law makers. They also suggested that the game be disabled near roadways or parking lots “to protect pedestrians and drivers alike.”

Several people have already been hurt by drivers playing the mobile game and San Diego car accident attorneys say distracted drivers can be held liable for their irresponsible driving habits. If you’ve been injured by a distracted driver, The Barnes Firm has experienced lawyers who can help you get the best result possible.