Every Hour of Lost Sleep Increases Your Risk of Crashing 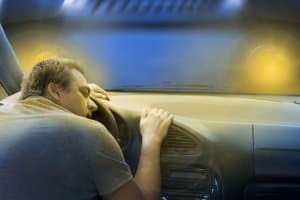 You know driving drunk or getting distracted by a text message is a huge safety risk because these activities are illegal in all states. But far too many Americans aren’t waking up to another reality: driving drowsy can be just as dangerous.

According to a new report published by the AAA Foundation for Traffic Safety, drivers who only had five or six hours of sleep overnight are twice as likely to crash as those who had more than seven hours of rest.

An accident attorney at The Barnes Firm says fatigue can be a serious issue when it involves hauling tractor-trailers and many truck crashes are directly related to the lack of sleep.

“One of the first things we look at is a driver’s rest log whenever our team investigates a crash involving a large truck,” truck accident attorney John Sheehan said. “The less sleep a driver has, the higher their risk for crashing and that should all be properly recorded.”

Researchers at AAA found that drivers with only four or five hours of rest had four times the crash rate, mirroring statistics for drunk drivers.

“If you haven’t had at least seven hours of sleep, you probably shouldn’t be getting behind the wheel of a car or truck,” Sheehan said. “Some drivers think they can just power through the fatigue but we see accidents caused by sleep deprivation time and time again – it’s not worth the risk.”

More than one-third of Americans don’t get enough shut-eye on a regular basis, a Centers for Disease Control and Prevention analysis found. In most cases, adults should be getting seven to nine hours of sleep every day – and in some cases, 10 hours may be warranted the Sleep Foundation says.

If you’re feeling sleepy, truck accident lawyers recommend pulling over for a quick nap – just 10 to 20 minutes can have huge safety benefits, and it could even save a life.

More than 35,000 people were killed in traffic crashes last year and before AAA’s new study, research has suggested that roughly 20 percent of those accidents involved a driver who didn’t have enough sleep. That’s roughly 7,000 deaths that could have been prevented if a driver had just a few more hours of rest.

If you or a loved one has been hurt or killed by a large truck, let an experienced truck accident lawyer go to work for you. The legal advocates at The Barnes Firm have reviewed countless rest logs after a truck accident because they know that evidence can help you and your family get the best result possible from a claim.