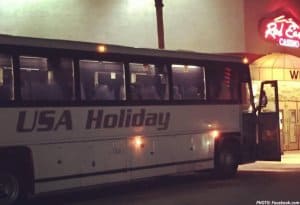 LOS ANGELES – Dozens of casino-goers were injured and at least 13 were killed when a California tour bus crashed into the back of a tractor-trailer on Interstate 10 Sunday morning near Palm Springs, state police said.

The crash happened at around 5:15 Sunday morning west of Indian Avenue outside Palm Springs. The bus was traveling at a significant speed, police told CNN. Police said at least 15 feet of the big rig’s trailer ended up inside the bus and of those who survived the crash, their injuries ranged from moderate to severe.

Passengers Dora Lamus, Ana Car, Miguel Martinez, and Jose Guerrero told the Los Angeles Times of the terrifying moments after the bus slammed into the trailer.

“Thank the Lord,” Dora Lamus, 49, of Los Angeles told reporters in Spanish as she looked upward in prayer.

Dora Lamus still had visible injuries after she was treated and released from Eisenhower Medical Center in Rancho Mirage, the Times reported.

Ana Car, 61, was asleep at the time of the crash but she recalled the number of Good Samaritans who jumped into action to rescue her and other survivors – even before firefighters arrived.

“All I could do was stand by the side of the road and cry and cry because there were still so many others trapped inside,” Ana Car told LA Times reporters.

Jose Guerrero, 65, was also asleep at the time of the crash. He told reporters that when he woke up in the back of the bus, he immediately noticed many people were injured including himself.

“Everyone was screaming for help,” Jose Guerrero said. “I was among the first helped out of the bus. Passersby who had parked near the scene of the accident helped me out of the window.”

Miguel Martinez told the Times he was ‘one of the lucky ones,’ still suffering from scrapes, cuts and bruises despite sitting in the back of the bus near Guerrero.

“People were screaming for help,” Miguel Martinez, 66, told the Times as he described some of the horrific injuries he witnessed in the crash.

Miguel Martinez recalled the truck was moving very slowly when the bus driver slammed on the brakes and skidded into the big rig’s trailer.

Based on records from the California Highway Patrol, the vehicle is the only bus licensed to USA Holiday Bus; and it had passed all recent safety inspections. The latest inspection was just six months ago in April.

Despite inspection records, Los Angeles bus accident lawyers say there can be many mechanical issues that could cause a bus to crash. On top of the safety inspections, an intensive legal investigation will also examine the bus driver’s record and whether fatigue was a factor.

Recent studies have suggested that fatigue plays a role in thousands of truck and bus crashes every year. A Los Angeles bus accident attorney can examine all available reports and on-board surveillance video to determine whether or not fatigue was a contributing factor in the crash.

In most cases however, there may be multiple factors that lead to a California bus crash.

When reporters asked police if the bus was speeding at the time of the crash, police responded by saying the tractor-trailer was traveling at just five miles per hour due to road work in the area. State police emphasized that the truck was not obstructing traffic.

Data recorders are often installed on buses to record such data however police had doubts that such data would be available, given the age of the bus – which was roughly 20 years old.

Los Angeles bus crash attorneys say even if a bus lacks such data-recording devices, a legal investigation could determine the speed of the bus at the time of the crash.

A complete investigation of the tractor trailer is also warranted. The maintenance records of both the truck and the trailer need to be examined along with the driver’s logbook.  For passengers and their families, many questions need to be answered:

Also an immediate and complete investigation of the construction zone should be done.

In addition to answering those questions, an intense legal investigation will also look at the records of all drivers involved – including the driver of the big rig.

Witness statements need to be taken from other commercial drivers and experts regarding their thoughts on the danger of the road construction zone.

More than 30 people were hurt in the California bus crash on I-10 on Sunday, which was one of the deadliest crashes in California history. 12 victims were treated at Eisenhower Medical Center in Rancho Mirage and JFK Medical Center received five patients, Fox News reported.

Using eye-witness statements, an analysis of road conditions and a crash reconstruction, an experienced lawyer could determine precisely how a crash occurred – and why.

In many bus crashes, victims and their families can be entitled to compensation for medical bills, lost wages, missing time from work and for pain and suffering. A thorough legal investigation can help maximize a California bus crash victim’s compensation and, perhaps, spur changes to make sure similar accidents and injuries are avoided in the future.