Doctors: This Common Grilling Item is a Hazard 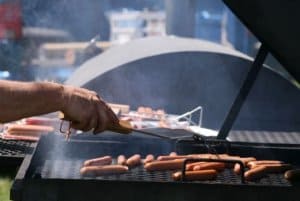 SAN DIEGO – It’s spring! Time for you to take out the grill and fire-up some burgers and sausages — but as you’re cleaning the grill for the first time this year, doctors are warning about rare but serious injuries caused by grill brushes.

A San Diego defective product attorney at The Barnes Firm says several people have been hospitalized because of these potentially dangerous tools.

“A person may not even be aware that they were injured until it’s too late; and these injuries are more common in the spring and summer months in San Diego,” defective product attorney John Sheehan said. “The concern is over wire bristles that can come loose and stick to the grill, eventually ending up in food.”

Doctors noticed these injuries were occurring far too often and one group recently conducted a study to estimate how many Americans get hurt by wire grill brushes.

The study discovered that between 2002 and 2014, nearly 2,000 Americans were hospitalized with injuries related to wire grill brushes. Among these injuries, the mouth, throat and tonsils were most often affected but some people suffered severe injuries to the stomach or intestines.

Of course, many grill-related injuries spike during the spring and summer months. San Diego defective product lawyers say many of these accidents could be caused by faulty parts.

“Four out of five American families own a grill and most of those grills have highly explosive and flammable propane tanks,” Sheehan said. “If just one part on the grill or tank malfunctions, someone can suffer serious burns or other injuries.”

Doctors and attorneys suggest using extreme caution when operating any type of grill, and be aware of the dangers of grill-brushes. Doctors remind grillers to check the brushes before each use and toss-out brushes with loose bristles. Due to the number of accidents, attorneys also suggest checking grill grates for stray bristles or other dangerous debris before cooking.

Some grill designs and many grill tools, like brushes, may not have the proper warning labels required to help protect consumers from serious injuries.

If you’ve been injured, a San Diego defective product lawyer at The Barnes Firm can review your case for free. Contact an attorney today to get started.