Distractions Cause The Most Car Crashes 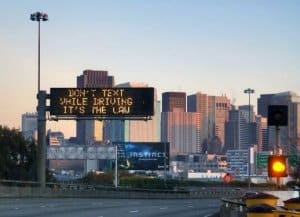 SAN DIEGO – There are many factors you can’t control when you’re driving – like a defective car part or bad weather – but almost all car crashes are preventable.

Many of the things we already consider to be distractions could be more dangerous than we originally thought, according to a new study from the Virginia Tech Transportation Institute. Distractions like texting, talking on the phone or just changing the radio station were all found to directly cause car crashes after a three-year study.

“It’s no secret – there are more driving distractions today than ever before in San Diego,” car accident attorney John Sheehan said. “We all know they’re dangerous but many drivers ignore the warnings and as a result, we’ve seen the largest spike in car accidents in 50 years.”

The Virginia Tech study is called the “Second Strategic Highway Research Program Naturalistic Driving Study.” In simpler terms, researchers recorded volunteer drivers for three years by equipping their cars with cameras and sensors. The videos showed that something simple, such as reaching to grab your phone, can cause a potentially deadly car crash.

The study also concluded that certain emotions were also more likely to make a driver dangerous.

“Many people don’t think about their emotional state before getting behind the wheel,” Sheehan said. “This decision has caused countless crashes but they could all be prevented by taking a deep breath and focusing on the road.”

Perhaps the most disturbing finding was that drivers were engaged in distracting behavior nearly 70-percent of the time they were behind the wheel. San Diego car accident attorneys say the findings are shocking.

“These are volunteers who knew they being observed in the car and it’s likely that they altered their behaviors since they agreed to be filmed,” Sheehan said. “There are many other drivers out there who won’t adjust their behaviors and that should be concerning for everyone who uses the road.”

A recent analysis of accident reports found that distractions were a factor in four of every five crashes.

If you’ve been injured by a distracted driver, the San Diego car accident attorneys at The Barnes Firm can help. To learn more about how a law office can help you recover, contact us.