The Dangerous Effects Of A Long Rush Hour 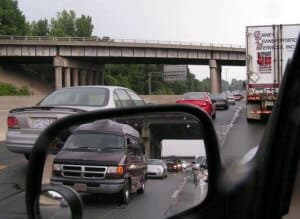 LOS ANGELES –Southern California has become synonymous with traffic jams. On average, Americans commute nearly an hour every day, according to Census statistics. Each year, drivers in the Southland spend an average of 90 hours stuck in traffic.

That time sitting behind a wheel can not only be frustrating but it can affect your health and increase the risk for an accident.

“An agitated driver is often a dangerous driver in the gridlock of Los Angeles,” car accident attorney John Sheehan said. “Traffic is irritating and that stress can lead to poor decisions and sometimes road rage.”

Stress is the obvious health risk drivers are subjected to while jammed bumper to bumper on Interstate 10. However, traffic can also expose drivers to harmful air pollution. Researchers found that, even though it may be hot, driving with the windows up can reduce exposure.

Sitting behind the wheel can also be a pain in the, well, everywhere. According to a 2010 Gallup poll, many commuters complain of experiencing chronic neck and back pain. Doctors have also found that drivers with longer commutes tend to weigh more on average as well.

The biggest risk on a daily commute, however, is driver inattention.

“A distracted driver is very dangerous, and it’s the number one cause of traffic collisions in the nation,” Sheehan said. “Many of these crashes happen in rush hour traffic because a driver can get bored and begins doing something they shouldn’t do while behind the wheel.”

Sheehan said texting and driving is obviously a dangerous habit but other distractions have been known to cause crashes as well. Eating or drinking, playing with the radio, talking with a passenger, or simply staring out the window at a billboard can lead to serious injuries. Studies have shown drivers are often distracted while stuck in that parking lot we call the 101.