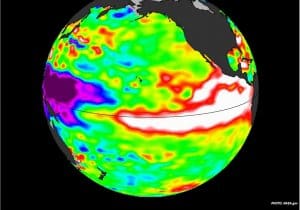 SAN DIEGO – You’ve heard about the Almighty El Niño by now but its full power hasn’t been unleashed… yet. That could change this week and drivers in Southern California should prepare for rain.

A lot of rain.

Just take a look at satellite images and you can see just how strong this El Niño could be.

Over the next week, at least four storms are brewing across the Pacific Ocean – and they’re all pointed toward California.

“If the forecasts are correct, we could see back-to-back-to-back rain storms in San Diego,” car accident attorney John Sheehan said. “Rain is statistically the most dangerous weather for drivers and powerful storms can be a challenging commute even for the most experienced drivers.”

Unlike some summer storms, El Niño-backed rains don’t pour a lot of rain at one time. Instead of 8 or 10 inches in 24 hours, it’s one or two inches per storm. But as the storms add up, Californians can expect problems.

As the once dried-out hillsides get saturated with water, the chance of a mudslide increases. Roads can also quickly flood.

“If you can’t see the roadway, you shouldn’t be driving on it,” Sheehan said. “Water-filled streets can be surprisingly deep and cars can begin to hydroplane at speeds as low as 30 miles per hour.”

Forecasters are expecting rain but the worst problems will probably hit the Southland later in winter.

Neighborhoods and roads in canyons and valleys could easily flood; causing traffic accidents, landslides and other damages.

Similar El Niño patterns caused billions in property damages in California. In 1983 alone, the bill came to over $500 million – equivalent to more than $1 billion today.

The El Niño of 1998 killed 17 people, caused countless car accidents and racked-up another $500 million in damages.

“These storms can be incredibly dangerous,” Sheehan said. “We urge drivers to slow down and pay attention to their surroundings as the unexpected can happen during these storms.”

The possibility of sinkholes rises greatly during rain storms and forecasters say the damage could be worse this year because of the recent drought – making ground extremely unstable.

State and local officials are urging residents to get emergency alerts and storm preparation tips on government websites like www.lacounty.gov/LArain and www.elninola.com.