Cities Make the Difference for Drivers 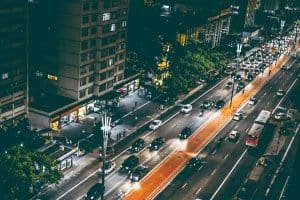 OAKLAND, Calif. – When you get in the car and buckle-up, you want to get to your destination safely. Many drivers take classes and training to hone their skills and in some cases, it can lower your insurance premium if not save your life.

But accidents happen in some places more than others. A new study from NerdWallet found that where you drive can have a strange impact on your safety – and your checkbook. The analysis looked at trends in almost 200 U.S. cities and writers determined some places are simply safer (and more economical) than others.

A Bay Area car accident attorney at The Barnes Firm says some of the safest drivers – people with spotless driving records – can often run into trouble; and it’s no fault of their own.

“Some of our clients are safe drivers who have never had accident before but all it takes is one bad driver to change your life in the Bay Area,” car accident attorney Landon Vivian said. “Some of these collisions can seemingly come out of nowhere and can leave you with painful injuries.”

Car accident lawyers like Vivian fight to get victims the financial support they need to pay for medical bills, lost wages and other expenses associated with injuries. The firm, which represents people across the west coast, has clients from many different backgrounds but lawyers say traffic collisions occur most often in large cities.

The study found that drivers were also more at risk along the Atlantic or Gulf coasts. 13 of the 20 most dangerous cities were located in those areas.

In contrast, 12 of the 20 safest places were located west of the Mississippi River.

The “safest city,” according to the study, was Cary, North Carolina. Using federal traffic data, writers determined Cary had the second-lowest rate of fatal accidents with just 1.3 per 100,000 residents. In 2014, the suburb of Raleigh reported just two deadly crashes and drivers only pay an average of $729 for auto insurance.

“Dangerous” cities, like Detroit, Michigan, were much different. Drivers in the Motor City paid an average of $5,409 for insurance – more than $4,500 more than the residents of Cary. Detroit also recorded 16.2 fatal car accidents per 100,000 residents and city police reported a slew of car break-ins and thefts.

“Drivers can and should do everything in their power to be the safest driver they can be because it can minimize your risk of an accident,” Vivian said. “Unfortunately, it won’t eliminate your risk because while you may be a safe driver, there are others who have no regard for safety on the roadway.”

If NerdWallet’s analysis is indeed accurate, your safety may depend on your zip code. At the very least, the amount you’re shelling-out for insurance does.