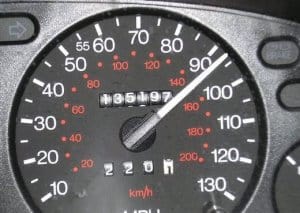 LOS ANGELES – Speeding is one of the most dangerous driving habits and there are plenty of statistics to back that statement up. Most drivers don’t need statistics or scientific studies to come to the conclusion that speeding is unsafe in almost any scenario. Still, more often than not, drivers speed.

A San Bernardino Valley College student recently completed an observational case study for his Psychology 100 course to show just how many people disregard the speed limit. He concluded, like many reputable scientists and researchers, that it’s better to drive with a woman than a man.

Los Angeles car accident attorneys at The Barnes Firm elaborated on the relationship between speed and gender.

“Case studies have shown that over 70 percent of men admitted to speeding every day in Los Angeles,” car accident attorney John Sheehan said. “At the same time, only 30 percent of the women surveyed said they drive over the speed limit.”

The collegiate study was small but telling. While traveling on a mountainous highway, the student traveled the posted speed limit in the fast lane and counted how many people passed him.

The student observed 10 men and 10 women and took note of their driving behaviors.

Of the 10 men he witnessed, all of them exceeded the speed limit and passed him. The student noted that male drivers often ‘became frustrated that I was only driving the speed limit.’

Of the 10 women he observed, only six passed him.

His conclusion: “The maneuvers [male] drivers expressed attempting to pass me made me feel as if they were showing signs of aggressive offensive driving rather than how we were instructed in driving school that we need to be defensive drivers,” he wrote.

Insurance companies understand these statistics and surveys as well. In many cases, women get lower insurance premiums and, generally speaking, males between 16 and 25 pay some of the highest premiums in the country.

Although they’re unlikely to be guilty of speeding, surveys have shown women admit to texting or using a cell phone while operating a vehicle at a rate of 25 to 50 percent more often than men.

It’s unclear exactly why men display more aggressive driving habits but Los Angeles car accident attorneys said defensive driving minimizes your risk of getting in a crash. This includes putting two hands on the wheel – no texting or taking phone calls, even eating and changing the radio can be distractions.

Sheehan said although it’s important to be aware of the drivers around you, anything can happen at any time. Even when you obey all the traffic laws and you drive defensively, another driver may not be as courteous.

“There’s no true way to prevent other people from driving aggressively,” Sheehan said. “When you’re on the road, you only have control over the wheel in front of you.”