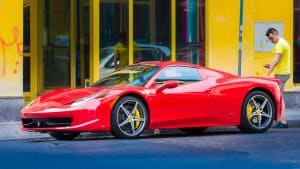 LOS ANGELES – Air bag recalls are proving to be as diverse as the American melting pot, even affecting over 800 Ferrari supercars.

To try to wrap your head around the recent airbag recalls, imagine how big Los Angeles is. There are more than 12-million people in the Southland. It’s very apparent at rush hour when the freeways are clogged bumper-to-bumper with angry motorists. Yes, there are a lot of people.

Now imagine a city three times the size of L.A. and every resident has a vehicle with potentially dangerous exploding airbags.

Ferrari is the latest vehicle manufacturer subject to such a recall, according to a filing with the National Highway Traffic Safety Administration (NHTSA). Most of the 34 million vehicles under recall have defects associated with airbags developed by Japan’s Takata Corp. The maker of Ferrari’s airbags was not mentioned in the recall notice.

Los Angeles car accident attorneys at The Barnes Firm say the latest recall can be an important reminder to check your vehicle for open recalls.

“These recalls were issued for your safety and the safety of other drivers but there may still be thousands of unfixed vehicles on the streets in Los Angeles,” car accident attorney John Sheehan said. “Some of the airbag defects have been linked to deadly accidents so it’s very important to get your vehicle fixed as soon as possible.”

The Takata airbag recall is the largest in U.S. history, and the federal government has been recalling cars for nearly 50 years. The recall, which began in 2013, escalated last year and several deaths have been linked to the faulty airbags.

Recently, the federal government began probing other airbag suppliers whose inflators ruptured, causing injuries. It is unclear if Ferrari’s recall is related to new investigations or if it is completely unrelated but injury attorneys say any accident can be prevented with one simple action:

“It doesn’t cost you anything to clear your vehicle from a recall list,” Sheehan said. “On the other hand, it could cost your life if you don’t get the vehicle fixed.