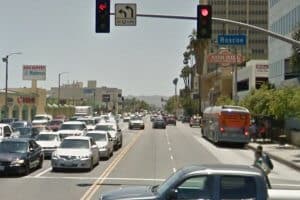 LOS ANGELES – If you live in Southern California, you know how crowded it can get on the streets, roads and highways. More than 7-million vehicles are registered in Los Angeles County alone (no wonder why there’s so much traffic!) and every year, car accident investigators log thousands of crashes.

Although each crash has unique circumstances, the majority of the car crashes in Los Angeles occur at intersections; and some of those intersections are more dangerous than others.

A recent analysis of public crash data found that 20 of California’s top 25 most dangerous intersections are in the City of Angels, including eight in the top 10.

Los Angeles car crash lawyers at The Barnes Firm say while distractions and speed often play a role in these crashes, there are many more factors to consider.

“We usually see high amounts of car and foot traffic at the most dangerous intersections in Los Angeles,” car accident attorney John Sheehan said. “In many cases, we look at road stripes, street design, lighting, and other elements that can contribute to a crash. Some intersections are downright dangerous.”

According to the analysis of California Highway Patrol data, there were more than 30 crashes at the corner of Roscoe Blvd. and Van Nuys resulting in 32 injuries last year, making it one of the most dangerous intersections in the state.

That crossroads is well-traveled, both in terms of cars and pedestrians. As with other typically dangerous intersections, there are a slew of shopping centers on or near the corner of Roscoe and Van Nuys, including a Wal-Mart, a gym, a CVS pharmacy, and the Panorama City mall.

The intersection has been the cornerstone of several public safety campaigns, urging careful driving and pedestrian security – and police have had good reason to…

Four of the top 10 most dangerous corners intersected with Roscoe Boulevard including:

Los Angeles car accident attorneys say speed often plays a role in these crashes but a bad street design can also be a factor. If you’ve been injured in a Los Angeles car crash, you may be entitled to significant compensation.

With offices across state, including one in downtown Los Angeles, The Barnes Firm has the resources to help you and your family get the best result possible.

Contact us today for a free consultation and analysis.