More Than 20 Hurt in Metrolink Crash 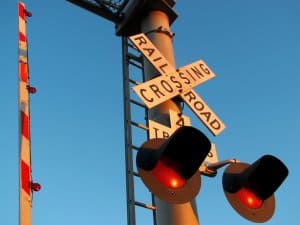 LOS ANGELES – More than 20 passengers reported injuries after a Metrolink train made a sudden stop in Sun Valley on Tuesday. According to the L.A. Times, the train was heading south to Los Angeles when it grazed a tractor-trailer.

Officials did not report any serious injuries as a result of the crash but a Los Angeles train crash lawyer at The Barnes Firm says many passengers may have suffered long-term damage during the accident.

“Many trains are not equipped with seat belts or safety features that would help protect passengers during a sudden stop,” train accident attorney John Sheehan said. “Passengers in these types of accidents can often suffer whiplash or other head and neck injuries that can persist for years.”

According to a news report from KCBS, most of the injured passengers were complaining of ‘neck and back’ pain.

Witnesses told KNBC that the truck hit the gate arm, bending the arm over the railroad tracks. According to witness reports, the train ran over the broken gate arm and clipped the back-end of the tractor-trailer.

Railroad officials told KNBC that the intersection on San Fernando Road ranks 18th in Los Angeles County when it comes to the probability of a train-vehicle collision and it’s not the first time a crash has occurred at that crossing.

This time, the train remained on the tracks and officials reported it was still running with a delay of an hour and 45 minutes. However, Los Angeles train accident lawyers say there may be problems at this crossing that haven’t been addressed.

“In train crash cases, every aspect of the accident needs to be investigated,” Sheehan said. “Passengers will want to know all of the information regarding the train, the truck and the warning gate. Was the gate functioning properly? If a gate arm goes down too late, there’s a much higher risk of a collision at that intersection.”

Of the more than 180 passengers on the train, nearly two dozen suffered injuries, fire officials said. Los Angeles train accident attorneys say due to the nature of the crash, there may be more passengers who need to visit the hospital.

“Neck, back and head injuries can be difficult to manage on your own and they often need professional medical attention. Our firm has handled many train accident cases and we’ve helped many victims get the help and medical attention they need.” Sheehan said.

“These passengers also want help answering why or how this accident happened. Our team reviews the entire investigation and we’ll find any videos, train conductor records, inspection records, railroad design, road surface components, crossing light timing and positioning, intersection accident history and witness statements will all be crucial from a legal standpoint.

“What do the driver and maintenacnce logs indicate from the truck company? What is the vehicle’s and this driver’s accident history? Was cell phone usage a factor? Was the driver running late? When was the next appointment?

Sheehan says every victim also wants to make sure that this type of Los Angeles train accident doesn’t happen at the same crossing again.