1 In 4 Drivers Were Using A Phone Before Crashing 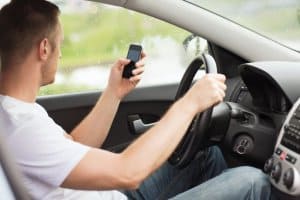 LOS ANGELES – The decisions made in the moments before a car crash can be the difference between life, death or serious injury. The problem is, almost one in four drivers were using their phone in those moments before a crash, a new study found.

According to research from Cambridge Mobile Telematics, distracted driving is a BIG problem. The company, which makes apps for car insurance providers, found that drivers were not paying attention to the road in more than half of the trips that ended in a car crash.

CMT’s apps watch for violations such as phone use while driving, speeding, hard braking or sudden acceleration, and how much time a driver spends behind the wheel. The apps then relay the information to insurance companies, so that they can better understand driving behavior.

On drives that involved a crash, the driver was distracted for an average of 135 seconds – that’s more than two minutes! And drivers were found to be glued to their phones for at least two minutes on more than 20-percent of all trips, many of which occurred at high speeds.

…BUT THERE ARE LAWS

Road fatalities have skyrocketed over the past few years, and nearly every state now has laws banning smartphone use, specifically, texting. Despite these laws, and the heavy fines violators could face, drivers continue to speed ahead with their smartphone in-hand. In fact, researchers believe drivers are more distracted than ever.

According to CMT’s newest data, states with anti-texting laws only experienced a slight safety improvement. Researchers found these were the average times a driver was distracted by their phone in a given state:

SHARING THE ROAD WITH UNSAFE DRIVERS

Texting and driving is more prominent than ever, and being a safe driver doesn’t necessarily put you out of harm’s way. In many cases, a distracted driver isn’t just risking their own life – they’re risking the lives of everyone they share the road with.

Many drivers feel they can get away with texting and driving by hiding their phone out of sight, but this notion is rapidly changing. Police and crash investigators now have the ability to get phone and data records from drivers involved in a crash.

If a distracted driver injures or kills someone else, these records can help victims and their families get the best result possible from an injury claim.

If you believe your family has been negatively impacted by a distracted driver, a Los Angeles car accident lawyer could help.